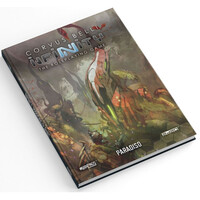 Fame, glory and fortune wait for those brave or foolhardy enough to risk the dangers of Paradiso, so gear up and don’t miss the next Orbital Elevator planet side!

Join the Human Sphere’s mightiest warriors and try to stop the Evolved Intelligence’s onslaught or lose yourself in populous cities under siege while you try to figure out who the infiltrated spy is feeding information to your enemies. Make sure you bring all your best equipment and don’t forget your bathing suit, for things are about to get hot in the Meat Grinder also known as Paradiso.  We have fun, games and the bloodiest war in the Human Sphere!

One of the most fertile planets known, living in this angry planet is a test for the hardiest settlers and warriors. Keep your wits about you or the jungle, its inhabitants or something worse will swallow you whole in an instant.  Hiding a tragic and terrible past, Paradiso is home to dark secrets and intrigue. Even before the NeoColonial Wars, the jungle planet has been the theatre of brutal conflict, destined to loom through the histories of numerous civilisations, human and alien alike. Never have the stakes been so high for Paradiso is the grandest trophy in the Sphere. Not only for the vast wealth offered by the system itself but with wormholes connecting to two alien powers, Paradiso is a Rubicon that if lost would lead to the Downfall of the Human Sphere.