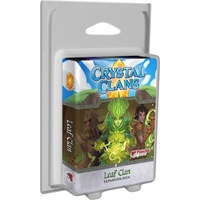 Emerging from the depths of the forest, a new clan seeks the power of the magic crystals. Sow the seeds of your victory and cultivate power with the Leaf Clan expansion deck for Crystal Clans! This deck contains a new rule for the Leaf Clan, allowing them to sow their unit losses into areas to power up their other units. Use The Huntmaster to bring discarded units back into play, or bring Kesslia into play, allowing her unit to jump to areas with sown units. Grow victory from the earth and seize the crystals with the power of the Leaf Clan!