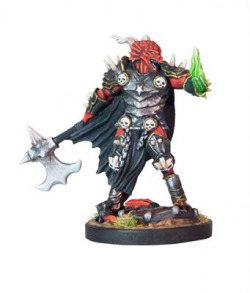 After a climactic battle with Vecna in the penultimate episode of Critical Role Series 8, Arkhan the Cruel raised his magical battle-axe Fane-Eater above his head and whispered a prayer to Tiamat. Bringing the axe down, Arkhan stunned the members of Vox Machina by chopping his own arm off at the wrist instead of destroying the hand of the newly lifeless lich Vecna.

Then in the blink of an eye, Arkhan attached the magical hand and used it to teleport himself to a location unknown.

This representation shows Arkhan in the aftermath of this fateful battle, harnessing the powers of Vecna whilst his own severed hand lies beneath him.