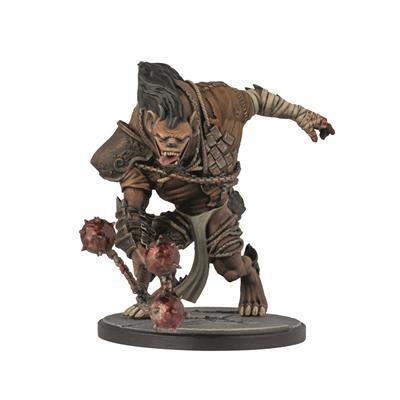 The demon lord Yeenoghu, also known as The Beast of Butchery, and The Gnoll Lord, appears as a battle-scarred Gnoll towering 14 feet tall. He has matted fru covered with patchork armor made from discarded shields and beastplates held together by chains and decorated by the flayed skin of his fiercest foes. His face is like a grinning predator's skull.

Yeenghu wields a triple-headed flail called The Butcher, which he can summin into his hand at will, although is is as likely to trea his prey apart with his bare hands before ripping out it's throat with his teeth. Charming, eh.

Contents: 1 oversized miniature with resin components. Miniatures are supplied unpainted. Preparation and assembly may be required.