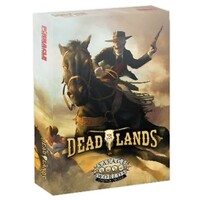 Welcome to the Weird West!

The year is 1879, but the history is not our own. The guns of the Civil War are silent thanks to a tense cease fire between North and South. California is shattered by the Great Quake of '68, a new superfuel called ghost rock is revealed in the flooded channels and buried in the cliff faces that loom above. Powerful Rail Barons strive to be the first to complete a transcontinental railroad, and the Great Rail Wars exact a bloody toll on an American frontier divided between not only the Union and Confederacy, but the Sioux Nation, the Mormon state of Deseret, and the Independent Commonwealth of California.