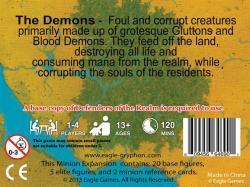 Defenders of the Realm - Demons Expansion

The Demon Minions are foul and corrupt creatures primarily made up of grotesque Gluttons; bloated creatures that feed off the land, destroying all life and consuming the mana from the Realm as they trundle toward Monarch City.

In combat, the Gluttons attack using their long spike-like claws to skewer their enemies and pull them into their gigantic razor-toothed mouths, feeding upon their enemies the way they feed upon the Realm. Deadlier than the Gluttons, the Blood Demons charge into battle wielding a flaming sword that not only burns the body, but corrupts the soul as well.

The Demon Minions Pack provides the players with 20 Gluttons and 5 Blood Demons, along with 2 Minion Reference Cards describing how these Minions are to be used in playing Defenders of the Realm.