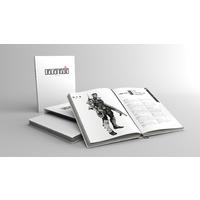 Degenesis: In Thy Blood Mankind is under siege.

But man has to face his greatest enemy yet: Homo Degenesis, spawn of the Primer, rises from the craters, each breed wielding powers that bend the laws of reality. Shapeshifting, precognition, psychokinesis, these aberrants are the peak of evolution. The insect swarms of the world come to do their bidding. Where Homo Degenesis claims territories, the earth rots and spore fields burst sepsis into the air, tolling the final bell in the Primers plan.Humanity’s time has come: Raise the weapons, fight back, or be forgotten. Forever.

The first book features a detailed introduction into the world of Degenesis, the cultures and cults that inhabit and dominate the world. Short stories, background information and an extensive and lavishly presented history chapter lead the reader into the customs and agendas of earth's survivors

The second book features the game mechanics, the rules of character creation, combat rules, cult gear and equipment, mods, as well as a unique and customizable character creation system. Along with that comes an introduction into storytelling, covert operations, and an vast chapter on the enemies that lurk inside the world of Degenesis. Embargo, a ready to play adventure, lures new characters right into the battlefield.