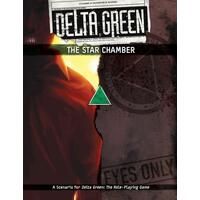 Delta Green's Task Force T.I. screwed up. They were in Myanmar, deep in the undeveloped hinterlands. The operation went south, people died, and something unnatural and monstrous escaped -- perhaps with the aid of an agent from the task force.

Now they're the operation for a new team of agents. The player characters must hear testimony from the survivors of Task Force T.i., decide exactly what happened and who's responsible, and recommend a course of action to Delta Green's leaders.

The testimony plays out scene by bloody scene. In each flashback, the players temporarily take the roles of the members of Task Force T.I. The players get tips on how to play them based on their individual personalities and prejudices -- and, more importantly, the ways that their teammates remember them behaving. Memories of overwhelming terror are rarely accurate. But memories are all Delta Green has to go on if a further horror is to be prevented.

"The Star Chamber" includes a complete scenario and six "secondary" Agents, ready to play in the flashback scenes.