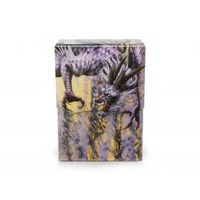 Hela collapsed in a heap, her daggers dangling against her legs. Her troupe was in various states of agony. The last skirmish had taken Robun’s legs and Mik’s eye. They were actors before the war. Now they were expected to fight?

A faint lilac haze fell upon the camp during supper. Dranar heard a rustling. His hand went to his bow.

Seven members of the enemy army walked out of the brush. “We mean you no harm! We’re just… hungry.”

Normally, they would kill. But tonight under the lilac haze and the watchful eye of Pashalia, hidden in the forest, enemies broke bread and became human again.