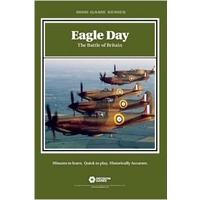 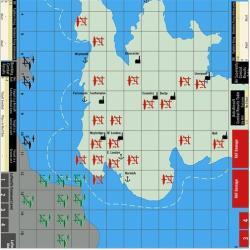 Eagle Day: The Battle of Britain

The sky over Britain in 1940 was the scene of one of the decisive battles of World War II, when the Royal Air Force defeated the Luftwaffe’s bid to gain air superiority and open the way for Operation Sealion. Eagle Day is a two- player wargame covering the most critical period of the Battle of Britain. The Luftwaffe player must move bombers and their escorts to attack targets in Britain, while the RAF player must utilize interceptors to stop them.

Each player moves units representing historic wings and groups. All the famous aircraft are here, including Spitfires, Hurricanes, Me-109s, Ju-88s, He-111s and many more. Each unit is rated for air superiority, bombing and speed. The game uses a new and unique system that facilitates aerial operations, dispensing with record keeping.

Eagle Day is part of the Air Wars mini-game series. Each player has a deck of Campaign Cards. They generate a range of events, including Fuehrer Directives, the Empire Rallies, and critical morale checks. Certain cards can be played in combination to gain operational advantage, leading to tense decision making. There are special rules for radar, fog of war, and the infamous Stukas.