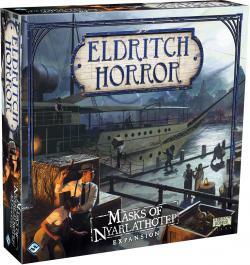 It seems that Yig, the snake-god of the central plains tribes—presumably the primal source of the more southerly Quetzalcoatl or Kukulcan—was an odd, half-anthropomorphic devil of highly arbitrary and capricious nature. He was not wholly evil, and was usually quite well-disposed toward those who gave proper respect to him and his children, the serpents; but in the autumn he became abnormally ravenous."
–H.P. Lovecraft and Zealia Bishop, “The Curse of Yig"

The fate of the world grows even more uncertain as the malignant influence of Yig, the Father of Serpents, extends across the globe. Previously defeated Ancient Ones attempt to reclaim the world once again, forcing Investigators to solve new mysteries to keep them at bay. All the while, terrible new Epic Monsters and dangerous new Encounters keep Investigators racing across the globe to stave off the collapse of the world.

Yig, The Father of Serpents

Yig’s cultists and the Serpent People make their way across the world, determined to conquer for their master. Savage and sly, these venomous cultists and the serpents under their control unleash a new horror on investigators – a condition called Poisoned.

Yig enters the game with six unique mysteries, and your Investigators will need to gather all of their strength and cunning to keep Yig from entering our world. Break the power of the Serpent Crown over the will of the people, and defeat the Winged Serpent Epic Monster in order to world safe once more.

Of course, Yig and his serpents aren’t the only threat to humanity’s survival. In Forsaken Lore, evil continues to spread as new Mysteries for the Ancient Ones included in Eldritch Horror are uncovered. Discover the Stone Circles where Yog-Sothoth’s worshippers gather and put an end to their arcane rituals, or do battle with the mighty Hydra Epic Monster as she rises from the sea to do the bidding of Cthulhu.

New Spells, Expeditions, and Encounters will test even the most courageous investigators. Cast the perilous Poison Mist Ritual Spell, or seek the ancient secrets buried in the rubble of Egypt’s White Pyramid.