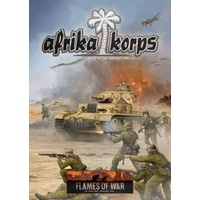 The German Afrika Korps is a hard-fighting force of tough veteran troops who have won many battlse and expect to win many more. Their Panzer III and Panzer IV tanks outclass the British tanks they face, and have been steadily upgradedto maintain their edge over the opposition. Their infantry are organised to have 'few men, many weapons', so they pack a ferocious punch whether facing infantry or tanks. These are backed b the famous '88' dual-purpose anti-tank/anti-aircraft gun and teh Stuka dive bomber.

Afrika Korps is an A4 hardback, full colour, 44-page book.
​Inside you will find:

A copy of the Flames of War ​4th edition rulebook is necessary to use the contents of this book.

4th Edition of Flames Of War is bigger (and smaller) than ever, with a new rulebook that is slimmer than previous editions but retains all the tactical challenges that you have come to expect from Flames Of War.