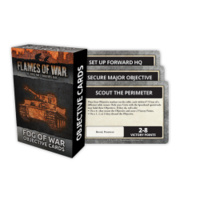 Contains 30 cards to enhance your force, field iconic warriors and cutomise your units.

The Fog of War Objective Deck adds a new mission to the game, creating an ever-changing game state where you may not know your opponent's plans right away. It allows you to play missions with objectives that vary from game to game, and can even change during the game. When capturing an objective in the Fog of War mission, you do not win right away, instead, you score victory points. The player who first hits the agreed victory-point goal wins.
Players select from a hand of Objective cards, and place them tactically throughout the game. They can be used two ways: with a shared deck, or with constructed decks.

Players follow the setup instructions for the Free For All or Dust Up mission in the rule book, but do not place any Objectives. Instead over the course of the game the players will draw cards from the deck and play them, attempting to achieve the various objectives' victory conditions and score the associated VPs.
These cards can be used in all the time periods in Flames Of War, Early, Mid and Late war. The deck adds an element of randomness and uncertainty to the game, forcing players to be flexible and make real-time decisions.

​Two of each of the Following Cards