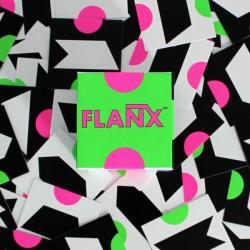 Flanx is an action-paced card game for two players that lasts for about one minute. Both players play simultaneously, attacking and defending at the same time by placing square cards (with forms and colours, so they only match following certain rules) in an attempt to encircle the opponent. As the table is your battleground, Flanx is a different experience wherever you play it.

In more detail, the goal of Flanx is to either place a card behind an opponent's card or build a path up to the other side of the table. Set-up is to put two matching cards at the center of the table. Both players draw three cards and at the same time start to look at them and try to place them to the cards already placed while minding the three placement rules:

The player who manages to place a card "behind" any card of the opponent wins the game.