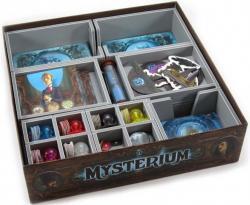 This Campaign 2 insert is designed to be compatible with Mysterium®, and the Hidden Signs® and Secrets & Lies® expansions. There is space also for any promo cards you might have. The design provides both efficient storage and improved game play. Many of the trays can be utilised during the game, and they greatly aid set-up and clear-away times. The rules and boards act as a lid on top of the trays.

The card decks are all removable from the box, and have space for all cards to be sleeved with quality sleeves.

There are two trays for the psychic's sleeves and the other irregularly shaped pieces. The other two trays are for the player pieces, with separate slots for each colour.

The remaining card trays form part of the bottom layer of the insert.

Many of the game trays can be used during game play to keep the components tidy as well as speeding up setup and clear-away times.