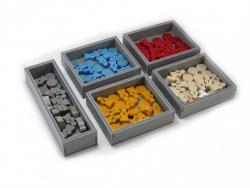 This Campaign 2 insert is designed to be compatible with Village®, and the Village Inn® & Village Port® expansions. The design provides both efficient storage and improved game play. Many of the trays can be utilised during the game, and they greatly aid set-up and clear-away times. The rules and boards act as a lid on top of the trays.

There is a space left between the trays at the bottom in the top layer for the black and green bags that come with the game.

In the top right corner of the second layer of trays underneath, the player farmyard boards act as lids on tray beneath. The smaller building overlays (the brewery and graveyard tiles) that come with the expansions are also stored here.

When you remove the farmyards and other building overlays, you will see the last two token trays in the top right corner.

You will also see on the right hand side next to the two card trays the ship tiles stored on their side in a slot for them.

Each player colour goes in a separate tray, with space for all five player piece sets. When setting up the game, players simply take their colour tray and use it in-game to store their pieces next to their farmyard.

There are two tray for the goods tiles. Each is made to be longer and thin, so that they can be placed on the board next to the crafts section of the board during the game.

These are also trays for the remaining tokens. Again, all are designed to be able to be placed around the board in easy access of all players during game play.

There are two game-card trays: one for the playing-card sized cards, all of which can be sleeved with quality sleeves (FFG sleeves used in testing), and one for the setup tiles.

There is a recess left for the sea travel board and the inn tile. The card trays are higher at one end so as to stop these boards moving around when the game is transported or stored vertically.

Finally the board and game rules go on top, filling completely the box space. The lid closes flush over everything and allows for vertical storage.