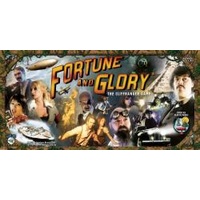 Fortune and Glory: The Cliffhanger Game

It is the late 1930s and the world is in turmoil. Humanity is on the brink of war as imperialist nations in the Far East and Europe work aggressively to expand their domination. The Nazis have taken control of Germany and now spread darkness across the globe in their hunt for powerful occult artifacts that can give them the upper hand in the days to come. But the spirit of adventure and freedom won’t be stamped out so easily.

Heroic adventurers from around the world answer the call, racing against time to hunt down ancient artifacts, explore deadly temples, and fight back the powers of darkness from engulfing the world. It is a race of good versus evil and only a cunning and agile explorer can claim the ultimate prize of… Fortune and Glory!

Fortune and Glory, The Cliffhanger Game is a fast-paced game of high adventure, vile Villains, edge-of-your-seat danger, and Cliffhanger pulp Movie Action. Players travel the globe in search of ancient artifacts, fending off danger and Villains at every turn in a quest for ultimate reward. So strap on your adventure boots and goggles, fire up the engines on the seaplane, and grab some extra ammo for your revolver…the Nazis already have a head start and in this race for Fortune and Glory, there’s no prize for second place!

Each player takes on the role of a pulp adventure Hero, hunting down ancient artifacts around the world and collecting Gear and Allies to help overcome the various Enemies, Dangers, and Villains that stand in their way. During each Game Round the Heroes roll off to determine the First Player then all get to Move (starting with the First Player), and then all get to Adventure (starting with the First Player). There are two resources in the game, Fortune and Glory. Heroes collect Glory by defeating Enemies and overcoming Dangers and then spend that Glory to Heal wounds and buy Gear and Allies. They collect Fortune by recovering Artifacts and selling them in cities.

In the Competitive Game, players race against one another to be the first to collect 15 Fortune. In the Cooperative Game, all of the Heroes work together toward a larger collective Fortune total as they race against a Vile Organization played by the game itself.