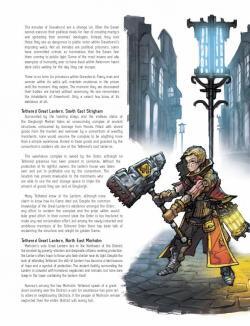 You are an immortal Tethered, a powerful warrior in the endless city of Aeternum.

Aeternum, the eternal city, is a place of strife and mystery. It is a metropolis that spans the entirety of known existence, its buildings, parks, and streets stretch from horizon to horizon without end. Within Aeternum, the souls of the dead do not lie still. When a human dies, their soul rises from their body as a green ghost of their former self. After the briefest pause, that soul will either ascend into the sky or crawl down beneath the ground. The people of the infinite city live their lives under the shadow of a disturbing revelation: the vast majority of souls do not ascend.

The Tethered, an order of undying champions, have stepped forward to guide and protect humanity. The early Tethered chose humanity over Celestials, Fiends, and worldly motivations and strove to ensure that the people of Aeternum could live long enough to find a way for their souls to ascend.

On the streets of Aeternum, the Tethered’s stories are told. Heroic tragedies play out in brutal fashion, unacknowledged by the people the Tethered are sworn to protect. The flash of black powder and the gleam of blades in the moonlight accentuate their struggle. Death is little more than an inconvenience to them, but each defeat carries a measurable cost in human souls.