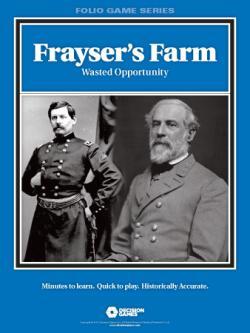 Wasted Opportunity - In June 1862, as Federal troops attempted to retreat after withdrawing from Gaine's Mill, Virginia, Gen. Robert E. Lee saw an opportunity to annihilate them on the congested roads between White Oak Swamp and the small community of Glendale. Lee's army included most of the notable Confederate luminaries, such as "Stonewall" Jackson, "Old Pete" Longstreet, A. P. Hill and others, collectively fielding 45,000 men. The Federals, numbering about 40,000, had become disjointed as they attempted to reach and cross the James River. At the same time, though, the Confederate approach became uncoordinated and irregular. The mass of the battle eventually pivoted north of Nelson's Farm, known to the locals by its former owner's name, Frayser.