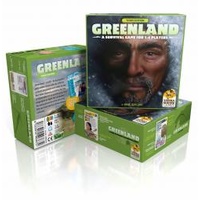 The three players in Greenland represent the Norse (red), Tunit (green), and Thule (yellow) tribes inhabiting Greenland from the 11th to the 15th centuries.

As a tribe, you attempt to secure food, resources, and technology to increase the size of your tribe and support children, elders, and livestock while also wiping out competing species or gathering resources to collect victory points. You must work around the weather and the extinction of natural resources as well as negotiate deals to protect your wives while you decide between monotheism or polytheism. In this tableau-building game, you'll send your population out to hunt native species of Greenland — but some might not come back. (Historically, the climate turned frigid and all but the Thule (Inuit) died out.)

In the game, play takes place over six phases; all players complete each phase in turn order, then the next phase starts. Each turn is one generation. In order:

Depending on each player's ending theistic worldview, he has a variable scoring based on successful hunts (polytheism) or resource gathering (monotheism).

Play the prequel, Neanderthal, for even more history!