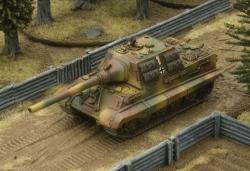 The Jagdtiger was the largest and heaviest armoured fighting vehicle used by the German panzer forces during the war. Work on the Jagdtiger began in 1943 and Henschel, who already made the Tiger and Königstiger heavy tanks, submitted plans based on the Königstiger.

Two prototypes were produced, one using the original Henschel Königstiger suspension, the other based on the Porsche suspension similar to that of the Elefant tank-hunter. The Henschel design was selected, but due to slow production ten Porsche vehicles were also produced. A total of 77 Jagdtiger tank-hunters were manufactured by the end of the war.

The Jagdtiger tank-hunter had thick armour and was nearly invulnerable from the front and even from the side only better enemy anti-tank tank guns could penetrate it. Its main asset was its powerful 12.8cm PaK44 anti-tank gun. This gun was derived from the K81 divisional gun and could penetrate any tank the Allies had, often blowing smaller vehicles into fragments. However, its armour and gun made it very heavy, which put a massive strain on its drive train and engine. This led to reliability issues and made it difficult to get good numbers of them into combat at once.

The Jagdtiger heavy tank-hunter first went into action with 653. Schwere Panzerjägerabteilung during Operation Nordwind in January 1945 and stayed in service until the end of the war.