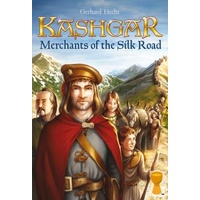 Kashgar: Merchants of the Silk Road

In Kashgar: Händler der Seidenstraße (Kashgar: Merchants of the Silk Road in English), the players trade different spices that are coming over the silk road from Asia to Europe. Each player has control over three caravans. In the beginning, each caravan consists of three cards that are spread out vertically so that the top part of each card is visible; each card stands for a caravan member with different abilities.

These actions can influence the player's stock of spice, gold and mules. To keep track of that stock, each player has his own board with wooden markers that are moved accordingly. Actions can also bring new members to the caravans and can enable the player to fulfill one of four delivery request cards from the middle of the table. Finally, there are actions that mix things up a bit, such as by getting rid of a caravan member or even influencing other players' caravans.

The game ends when one player has earned 25 points by collecting character cards and fulfilling delivery request cards.

The core mechanism of Kashgar could be called "open deck-building". The game plays quickly with little downtime. After having learned the different actions of the cards, players can start trying out different strategies and combinations of caravan members, caravan sizes, etc.