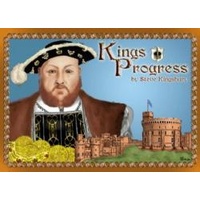 Medieval Kings would often visit the various cities of their kingdoms in order to enforce tax collection and discourage thoughts of rebellion and treason. This was known as a Progress. In this game each player acts as a King's chancellor overseeing the King's Progress throughout the cities of the kingdom.

The aim is to collect the most tax at the end of the game by steering your own King through the richest cities with the highest investments while scheming to force the Kings of your opponents to travel through poor cities with low investments.