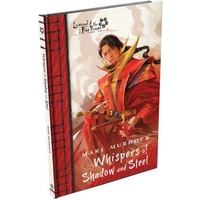 Legend of the Five Rings Novel: Whispers of Shadow and Steel Legend of the Five Rings Novel: Across the Burning Legend of the Five Rings Novel: the Sword and the Legend of the Five Rings – the Card Game Core Set

Bayushi Yojiro is known as the “only honest Scorpion” in the samurai clan infamous for its liars, schemers, and secrets. As an Emerald Magistrate, his duty is to uphold the Emperor’s laws and ensure justice is done. As a Scorpion, his duty is to loyally serve the interests of his clan—even if that means sacrificing his own honor. As both, Yojiro walks a line as razor-thin as the edge of a katana.

When a dignitary of a rival clan is murdered in the Scorpion-controlled City of Lies, Yojiro is sent to help investigate and bring the killer to justice. His fellow magistrates expect him to prevent Scorpion interference, while his clan expects him to protect its secrets. Where do his loyalties truly lie, and whom will he be forced to betray?

Whispers of Shadow and Steel is a new novella set in the world of Rokugan by Mari Murdock focusing on the Scorpion Clan! Not only does the novella feature a full-length thrilling story, but also includes two extended art cards from Legend of the Five Rings: The Card Game!