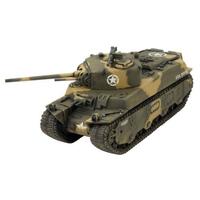 At the outbreak of World War II the US Army possessed few tanks, and no heavy tanks. In May 1940 the US Army Ordnance Department started to work on the T1, 50-ton heavy multi-turreted tank. This was similar in concept to the Soviet T-35 and other 1930s ‘land battleship’ designs.

On 26 May 1942 a cast-hull T1E2 and a welded-hull T1E3 were standardised for production as the M6 and M6A1 respectively. The initial plan was to produce 5000 tanks at 250 tanks per month, but this was soon cut to a more realistic 115 tanks in the first production run starting in December 1942.