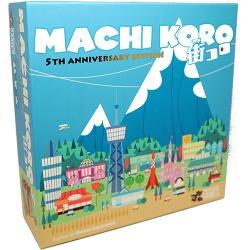 The Smash hit Spiel Des Jahres nominee is back in an all new, better than ever edition! All new 3d molded custom coins in 3 sizes and colors - no more punchboard money! Brand new 20mm chunky dice reworked rulebook for even simpler set up and play! New spot UV and gold foil on box set it apart from other games on the shelf!

Welcome to the city of Machi Koro, the Japanese card game that is sweeping the world!

You’ve just been elected Mayor. Congrats! Unfortunately the citizens have some pretty big demands: jobs, a theme park, a couple of cheese factories and maybe even a radio tower. A tough proposition since the city currently consists of a wheat field, a bakery and a single die.

Armed only with your trusty die and a dream, you must grow Machi Koro into the largest city in the region. You will need to collect income from developments, build public works, and steal from your neighbors coffers. Just make sure they aren’t doing the same to you!

Machi Koro is a fast-paced light-hearted game for you and up to 3 friends. Once you’ve had a taste of Machi Koro, this infectiously fun game may have you wondering if the dinner table ever served another purpose.
They say you can’t build Rome in a day, but Machi Koro will be built in under 30 minutes!

Machi Koro is a fast-paced and light-hearted die-rolling, engine-building game for you and up to 3 friends.

Machi Koro more than holds up to the massive worldwide hype it has garnered. It's the little game that packs a big wallop of fun in under 30 minutes. One round of Machi Koro and you'll defect from your country to take up permanent residence in this magical world.