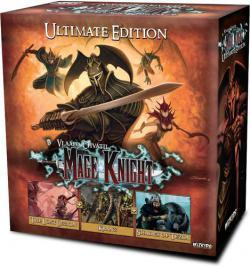 Created by the Renowned Game Designer, Vlaada Chvatil, Mage Knight is a game of Epic Exploration and Conquest that mixes character development, intrigue, and the clashing of swords to create a truly unique gaming experience!  Enter the mysterious world of the Atlantean Empire as 1 of 4 Heroes (or villians!) in this expansive world that allows players to conquer lands, steer the wheels of history and give birth to legends in this exciting all in one board game.

Choose to play competitively or cooperatively with other players as you roam the countryside affecting your own reputation by being either the benevolent leader or brutal tyrant.  Accumulate Fame and experience that translate into more powerful Spells and abilities, then use your power to influence units to join your ranks.  Will you play the Hero and gain favor among the people or will you destroy monasteries to steal Legendary artifacts hidden within?

Combining elements of RPGs, deck-building, and traditional board games, the Mage Knight Board Game puts you in control of one of four powerful Mage Knights as you explore (and conquer) a corner of the Mage Knight universe under the control of the Atlantean Empire. Build your army, fill your deck with powerful spells and actions, explore caves and dungeons, and eventually conquer powerful cities controlled by this once-great faction! In competitive scenarios, opposing players may be powerful allies, but only one will be able to claim the land as their own. In cooperative scenarios, the players win or lose as a group. Solo rules are also included.