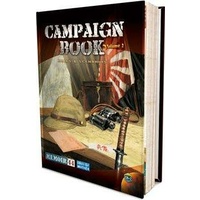 Campaign Book Volume 2 invites you to rediscover even more of World War II in all of its staggering scope and intensity. Forty six new scenarios spread across 11 unique campaigns will have you "island hopping" across the Pacific in a 4 year push to the Land of the Rising Sun; send you on a whimsical "Bicycle Blitzkrieg" to remote parts of Malaya; put you on the front lines of the first blitzkrieg in history in the "Fall of Poland"; dare you to "Break through Normandy" on giant Breakthrough maps of D-Day; and invite you to relive the exploits of the war's most famous "Air Aces"!

This second Campaign Book builds upon the campaign rules, first introduced in Campaign Book Volume 1, to let you play scenarios in succession with the outcome of each battle impacting the ones that follow. Advanced campaign rules, new special events and a punchboard with 50 tokens all combine to make these new campaigns ever more spectacular!

This book is an expansion for the Memoir '44 boardgame. An original copy of Memoir '44 is required to play.