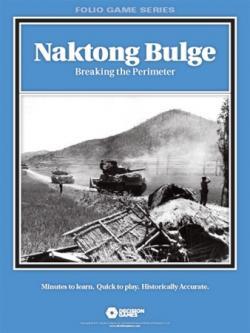 By August 1950 the North Korean Army had overrun most of the Korean peninsula, and was advancing rapidly toward Pusan, the last open port in South Korea.

The US Army hastily formed a perimeter along the arcing Naktong River to stop — or at least delay — the final North Korean breakthrough. Every available US unit in Korea, including a Marine brigade, was thrown into the fight against three North Korean infantry divisions converging to crush what became known as the “Naktong Bulge.”

Naktong Bulge utilizes the new Fire & Movement combat system that’s designed so players can augment their units with “support fire” during the course of the turn. From fighter-bombers to artillery, units can receive support to engage enemy positions and formations, allowing combat to develop at all levels. A single recon company, for example — perhaps supported by howitzers — could be tasked to assault a lone enemy infantry battalion defending a mountain pass. As its attack gets underway, however, the recon company may find itself under fire from heavy artillery. More support will be necessary to take the pass, but assets are limited.

In Naktong Bulge the attritional design of the new Combat Results Table simulates the true nature of combat during the Korean War. Units are typically two-sided formations that can incur casualties, accurately replicating the realities of combat and the high losses sustained by both sides during the Korean War. Winning the battle is thus a matter of maneuver, firepower and asset management.