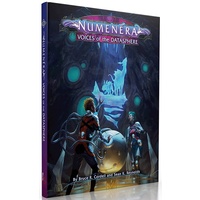 Numenera RPG: Into the Outside Numenera: Priests of the Aeons

No other aspect of the Ninth World evokes as much wonder—and generates as many questions from Numenera players—as the datasphere. This hardcover sourcebook opens up a whole new aspect of game play, in which characters interface with and explore the reaches of the datasphere. (Think Tron.) This strange new metaspace is not just an ancient alien data network, but in fact multiple such networks some damaged, incomplete, or aged and evolved past their original purpose—created by myriad civilizations and interacting in unexpected ways. The datasphere offers knowledge to be learned, treasures to be discovered, and wholly new challenges to be overcome.