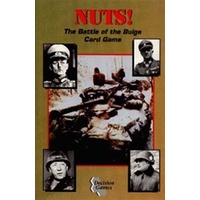 NUTS! The Battle of the Bulge

NUTS!:The Battle of the Bulge is a card  game for two, three or four players recreating the famous World War II  battle (16-31 Dec. 1944) in which the German Army  mounted a surprise attack on the thin U.S. forces deployed in the Ardennes region hoping to  breakthrough to the English Channel and split the Allied forces. Each player controls either the  German or U.S. and British forces. The cards include combat cards representing the  brigades, regiments, and battalions which fought in the battle. The Combat Command B Regiment  of the 9th Armored Division is shown below. Each unit is rated for it's strength in infantry,  armor, artillery, and cohesion. Players move and fight with their combat cards to eliminate the  opponent's cards and achieve or thwart a strategic breakthrough. Terrain cards represent the  significant geography of the battle, such as Bastogne (shown above), Ellsborn Ridge, and the  Meuse River, which served to hinder or speed the German attack. Event cards represent all the  situations that arose during the battle and include events such as German commandos misdirecting  traffic, mass surrenders and panics, air strikes, even Patton's prayer for clear weather!
Players draw cards in each daily turn from their own decks, then play their cards as  they see fit. Many cards can be played in the opponent's turn so there is constant interaction.  Each deck is complete, there are no cards to collect or trade. NUTS! comes in two 150-card sets  (North & South). Each set is complete and can be played on  its own, or the two sets can be played together; sold as one set.