Over the Edge Role Playing Game 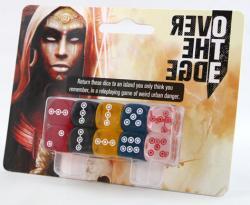 Over the Edge RPG Dice Set

During your stay with us, please remember that Liberty is Job One, Disarmament Means Peace, It’s Polite to Speak English, and, of course, Paranormal Activity is perfectly legal.

Thank you for your consent.

The Edge is the weirdest city in the world. Get into trouble. Question your place in the crazed multiverse. Transcend mortal limits. Join a cult. Fight a baboon. Along the way, you might find out who really controls humanity. Unless, of course, you’ve been working for Them all along.

Over the Edge is the classic RPG of counter-culture conspiracy, weird science, and urban danger. For its third edition, the game comes roaring back in a completely reimagined relaunch by its original creator. Everything old gets a new take. Nothing is a retread. Every conspiracy, every neighborhood, every major gamemaster-character is portrayed with a new spin. It’s not “25 years later.” Everything on the Island is reborn to surprise new and existing players alike.