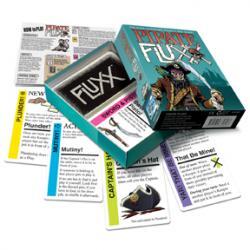 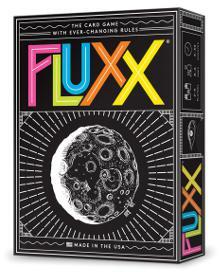 Yarrr! Grab your cutlass! Fluxx has taken up a life of Piracy on the high seas, and you, too, can come along for the ride. Plunder from your mates, wear the prestigious Captain's Hat, and Surprise your enemies

Nothing says piracy like the ability to steal stuff, and the New Rule Plunder lets you do just that - every turn you can steal a Keeper from another player for free!

The Captain's Hat Keeper gives you multiple bonuses and privileges - but watch out for the Action Mutiny, which lets another player don the Captain's Hat wherever it may be!

Most exciting of all are the new Surprise cards which have a purple stripe, and may be played out of turn to cancel out certain other specific actions taken by others.

It all begins with one basic rule: Draw one card, Play one card. You start with a hand of three cards... add the card you drew to your hand, and then choose one card to play, following the directions written on your chosen card. As cards are drawn and played from the deck, the rules of the game change from how many cards are drawn, played or even how many cards you can hold at the end of your turn.