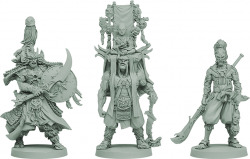 Rising Sun is a board game for 3 to 5 players set in legendary feudal Japan (up to 6 players with the expansion). As the Kami descend from the heavens to reshape the land in their image, it is up to each player to lead their clan to victory. Use politics to further your cause, negotiate to seek the most profitable alliances, worship the Kami to gain their favor, recruit monsters out of legend to bolster your forces, and use your resources wisely to be victorious in battle.
Created by acclaimed designer Eric M. Lang, Rising Sun reunites the same creative forces responsible for the smash hit Blood Rage, with stunning artwork by Adrian Smith and intricate miniatures sculpted under the direction of Mike McVey.

Each of the five clans in Rising Sun brings not only their own individual set of ten beautifully detailed miniatures for their Daimyo, Shinto and Bushi units, but also a unique ability that sets them apart from the others and affects all players' strategies.

Koi (Flow, Like Water) - Ever adaptable, the Koi clan is able to use hired Ronin as coins and vice versa, giving them great flexibility and making their decisions very unpredictable.

Dragonfly (Wings, Wind and Spirit) - Flying on gossamer wings, the Dragonfly clan is able to move anywhere on the map without restriction. You never know where they'll strike next.

Bonsai (Humility, Earth and Root) - Ever growing and evergreen, the Bonsai clan needs to spend no coins when buying resources. Strongholds sprout from the ground and Upgrades to the clan blossom naturally.

Lotus (Patience is key) - The Lotus clan dictates the flow of politics by turning the Political Mandates they play into anything they wish. A powerful ally to have at your side, and a terrible foe to betray.

Turtle (Hard as the mind; delicate as steel) - The Turtle clan builds their Strongholds on top of the shells of giant legendary turtles. These indestructible fortresses can move around the map and even join in the fights for the provinces.

Played over the course of a year, each Season in Rising Sun is divided into a Political phase, where players prepare their clans and set their plans in motion, and a War Phase, where dominance over each of the contested provinces is decided.

During the Political phase, players choose among a restricted selection for a Political Mandate to play. These determine the actions all players may perform. They can Recruit new units on their Strongholds, Marshal their forces across the map, Train to upgrade their clan with Season cards, Harvest to reap the rewards of the provinces they dominate, or even Betray their ally to bring opposing forces to their side.

When players perform a Train Political Mandate, they are able to spend their coins to upgrade their clans with Season cards that bring all manner of new abilities. From Virtues that give you bonuses according to your actions, to Enhancements that improve your clan, to powerful Monsters that may join your clan, bringing with them amazing strength or other more devious benefits.

At the start of each Season, players engage in a tea ceremony to negotiate new Alliances. Having the right ally and playing for mutual benefit (for a time) is often key to victory. Allies don't kill each other during war, and they also grant each other a unique bonus whenever they play a Political Mandate. Recruit extra units, build Strongholds when you Marshal, save coins when you Train, and reap a bountiful Harvest. However, the enticing Betrayal option always casts a shadow of doubt over Alliances.

Do not be too quick to Betray your ally, though, for such an action brings dishonor to your clan. Honor is a tangible force in Rising Sun. Clans are always competing on a ladder for who is more or less honorable than the other. Having more Honor than your opponent gives you the upper hand on any ties in the game, from a dispute when worshipping a Kami, to deadly war on the provinces. But occasionally being dishonorable might also be a valid strategy, for upgrades such as the nightmarish Oni often favor those at the bottom of the Honor scale.

When players Recruit their forces, they may choose to send their Shinto warriors to climb the mountains and go worship the mighty Kami. Three times per Season, each of these gods will grant their blessing upon the clan who worships them the most. The competition for the grace of the Kami can become fierce and change the course of the game. Each Kami grants a different benefit, from increased Honor, to extra Bushi, Ronin or coins. Only four of the seven Kami are used in each game, creating different dynamics each time you play.

Each Season ends with the War phase. In each of the contested provinces, the warring players secretly bid their coins on the different War Advantages. Only the winner in each of the different options is allowed to execute them, allowing for dramatic shifts in the outcome of each battle, or cunning players coming out ahead even in defeat. Bluff your way through impossible odds and trick your opponents into needlessly wasting their coins. Sometimes losing a battle may win you the war.

When Winter comes, all politics and fighting are over. Players gain extra points for winning battles in as many different provinces as possible, and also for certain upgrades they may have gathered. As the snow falls, the new Emperor will ascend!