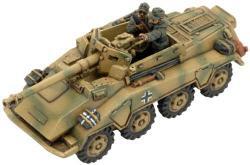 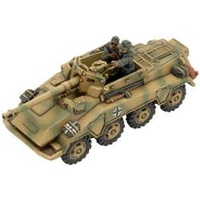 For the most part German armoured car designs during the Second World War were more than adequate for the roles they needed to fulfil. However, one very common complaint from armoured car crews was the lack of sufficient firepower when forced to engage the enemy.

The 7.5cm PaK40 complete with gun shield but minus its wheels was mounted on a pedestal in thecentre of the fighting compartment; this effectively turned the vehicle into a wheeled tank destroyer. However, the design was not without its limitations; as with any hull mounted gun, the PaK40 was severely restricted by its inability to traverse.