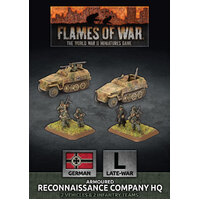 They are noted for their speed, mobility and great firepower. Because they’re part of a Panzer Division they cooperate closely with the tanks of the Panzer Regiment.

Mounted in their armoured SdKfz 251/1 half-tracks they travel into battle. They can fight on foot or assault from their vehicles.

The Panzergrenadiers are at their best when they put their mobility and firepower to use in combined operations with the Panzers. Panzergrenadiers will often precede the Panzers in an assault; attempting to create situations the highly mobile tanks can take advantage of.

Whenever tough hand-to-hand fighting is required the Panzergrenadiers are called forward and their gritty determination and excellent combat skills put them in good stead to clear enemy positions. If successful, they often clamber back aboard their carriers and pursue the enemy.

In defence they can often be equally effective, having an extensive allotment of heavy support weapons available from their company, battalion and division.

Often during successful offensive operations they are required to hold off enemy counter-attacks until reinforcements arrive to replace them in the newly won positions. They may have to hang on for some time while slower motorised and foot troops catch up to their positions.