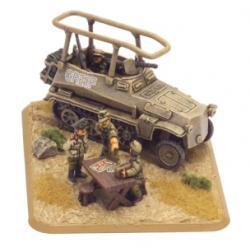 Erwin Rommel is probably one Germany’s most famous Generals, and one of the most recognisable names of WWII. Born in 1891 into a middle-class Swabian family, Erwin Rommel joined the German Army in 1910. When the First World War began in 1914, Rommel served on the Western and Romanian fronts, earning a reputation as a fearless and brilliant infantry commander.

In 1917, when on the Italian front, his alpine battalion of less than 500 men launched a daring attack, taking more than 9,000 prisoners and capturing 81 guns while breaking right through the Italian front line. For this he was awarded Germany’s highest honour for gallantry, the Pour le Merite.

Rommel stayed with the army after the war. During this time he wrote Infanterie Greift An (Infantry Attacks!), a book on infantry tactics that became an instant bestseller.

When war broke out Rommel was commanding Hitler’s headquarters guard. Rommel was not a Nazi, but he and Hitler formed a friendly relationship. So when Rommel asked for command of 7. Panzerdivision for the invasion of France, he got it.

In May 1940 the Germans attacked France and Belgium in a surprise attack through the Ardennes forest and across the Meuse river with 7. Panzerdivision leading the way. The sudden assault ruptured the French line. 7. Panzerdivision raced deep into the French rear, sowing confusion and panic.

Under Rommel’s leadership, 7. Panzerdivision quickly earned the nickname the Gespensterdivision "the Ghost Division" as neither friend nor foe were ever sure where it was. In six weeks of fighting, the Ghost Division took 100,000 prisoners and Rommel became one of the most famous generals in the German army.

In February 1941 Hitler summoned Rommel again. The Italians had been defeated by the British in North Africa, losing Libya, and needed help. Rommel was given command of the Deutsches Afrikakorps (DAK), the German Africa Corps. The name was a play on Deutsches Alpenkorps, the German Alpine Corps that Rommel had served in when he defeated the Italians 24 years earlier.