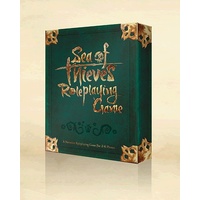 A Narrative Roleplaying Game For 2-6 Pirates Ahoy Scurvy Dogs! Are you seeking grand adventure, mighty sea battles and the glory of the pirate life? Do you have the strength to battle hordes of skeletons, treacherous rogues, and ancient curses? Then get ready to set sail, roll dice, and make your mark upon the Sea of Thieves!

Find your inner pirate in the Sea of Thieves Roleplaying Game. Using the new Avast system for quick and easy play, you will race other pirates to buried treasure, fight Skeleton Captains on tropical islands, tackle Voyages for the Gold Hoarders, Order of Souls and Merchant Alliance, and brave Megalodons and Krakens as they rise up from the depths to thwart your enterprises.

Based on the popular video game available for Xbox One and Windows 10 PC, the Sea of Thieves Roleplaying Game has everything you need to create exciting pirate tales on the tabletop. The rules are designed for quick, immersive roleplaying that favours action, problem-solving and above all, fun!