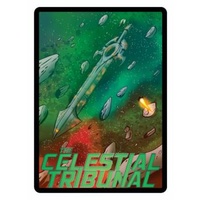 Sentinels of the Multiverse: The Celestial Tribunal Expansion

GTGSOTMCLTB Sentinels of the Multiverse: The Celestial Tribunal Expansion /assets/thumb/GTGSOTMCLTB.jpg?20190402182328 4.95

In the far-reaches of space, there drifts a colossal unmanned manufactory, shaped like a sword.

None know the true origins of the vessel, but it is posited that some ancient alien race built the factory and its rules to act as judge and jury for their home planet. The ship has an impartial A.I. that judges the actions of sentient life-forms it encounters. Then, if it senses any impropriety, it dispenses its executioners.

Automatons are constructed to severely punish those who the ship deems reprehensible. However, the A.I. is inordinately harsh in its rulings. So much, in fact, that many think this spelled the fate of the original creators of the A.I.

The Celestial Tribunal has acted thusly for millennia. If it finds its way into your galaxy, or if you find yourself in the range of its scanners, be prepared for a harsh sentence.