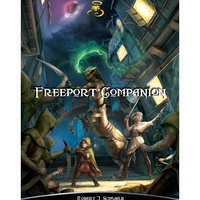 The Shadow Falls on Freeport! For years, Freeport has been one of fantasy gaming's most distinctive cities, a riotous city filled with pirates, orcs, and vile cults. More importantly, Freeport has always been a door to adventure. And now, Freeport comes to the world of Urth and the Demon Lord who threatens to unravel creation. The Shadow of the Demon Lord Freeport Companion provides you with all the rules you need to take your adventures to the high seas! Inside this book, you'll find: