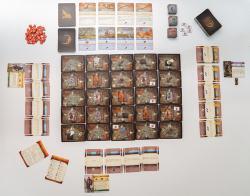 Shadowscape is a mini dungeon crawl played on a modular board of rooms filled with monsters, treasures and traps. It takes place in the Mistfall universe, allowing players to once again take on the roles of iconic Heroes of both Mistfall and Heart of the Mists. Move, plot and fight competitively, cooperatively or solitaire, in a fast and furious mini dungeon crawler of epic proportions!

Each game is played on a five-by-five grid of dungeon room cards, randomized before every game. Players start by choosing their Heroes and placing their tokens in the corner rooms of the dungeon. Each Hero comes with their own set of four double-sided Action Cards placed on the table in front of the player.

During your turn, you will use two of those cards, performing Actions like attacking monsters (but not other Heroes), searching through rooms, moving or preparing for the next rounds. After using an Action Card, you will flip it to the other side, featuring a different Action.

Each Action can be boosted by using the Boon effects from any number of Fate Cards from your hand. Fate Cards are drawn from a common Fate Deck at different points of the game (usually when using the Prepare Action). But Fate Cards can also be used for their alternative Bane effect, which allows you to move monsters, make unexpected changes to the layout of the labyrinth, or snatch treasures from other players.

Each turn will end with the active player drawing one Fate Card for its third and final effect: monster spawn and movement. This is also the time when most monsters will be able to attack the Heroes, dealing damage some of which can be easily soaked, while other have to be placed on their Action Cards, making them unavailable until the Hero is healed.