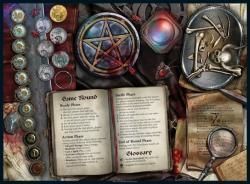 Deep in the wild lands of ancient Norway and Scandinavia lie the graves of old gods. Remote fjords hold them buried forever under a sky of grace and beauty, where they remain undisturbed due to the diligence of their guardians.

Clans of brutish trolls roam the wilds, keeping the resting place of their masters clear of humans that would defile the area. Trolls are typically unintelligent, and they hold no real reverence for gods, but they are loyal to their task, which has remained the same for thousands of years.

Trolls can grow to an enormous size, but many just look like tall, ugly humans. They have the capacity to learn language, and have been known to trade with humans, but they are fiercely territorial, and take their role of protectors very seriously.

Your minions, the trolls of the Bloodsoaked Fjord, grow mad with battle rage. The more injured they and their opponents are, the harder they fight!