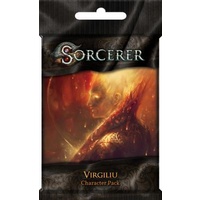 Virgiliu was born to noble parentage in Wallachia in the summer of 1442. He became a proud and accomplished young man. His horse was always the fastest, and his sword the quickest. On his 20th birthday, Virgiliu, the newest member of the Chivalric Order of the Dragon pledged to bring his brothers the head of Mehmed the Conqueror. He was joined by another Dragon, also eager to bring down the Sultan of the Ottoman Empire. Virgiliu and Vlad Tepes rode towards their destiny.

Their assassination plan failed, and Virgiliu was captured. He spent three years in an Ottoman prison, enduring humiliation and torture. One stormy night, his jailers decided to amuse themselves by the use of hot coals. Virgiliu could not stand up to this latest cruelty in his weakened and starved form, and he ended the night close to death.

It was at this moment that Virgiliu's power awakened within him. A literal fire of vengeance. He incinerated his jailers, and escaped the burning prison, leaving no one alive.

Playing Virgiliu, you will burn your opponent's minions with your Pyromancy while searching your grimoire for your next deadly assault!