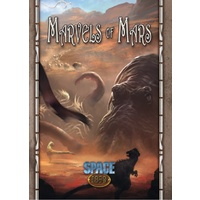 In the vast steppes, in the sand of equatorial deserts, on the mountain tops, at the icy poles, in the massive artificial canals and in the ancient sewers of Martian cities, underneath the dry dust of Mars’ surface, and in the wide open of the cloudless skies: the Martian flora and fauna thrive everywhere and have managed to adapt to even the most unfavorable of environments.

Expand the game’s atmosphere by including herds of grazing eegars, a lens beetle lamp, or a tasty krolik dish with all six legs still attached. Confront your players with challenging combat encounters with a teshuwaan, a dust kraken, or even the legendary white ape. Alternatively, add some flavor to your game by having the adventurers participate in a gashant race or ambush them with a Deimos crawler—the deadliest weapon of the Worm Cult. This sourcebook contains descriptions and stats for more than sixty Creatures of Mars, for every purpose imaginable!

Wonders of the Martian Past

The Mars of today is but a pale shadow of its former glory, where great technological marvels lie hidden in the sand, long forgotten by the native Martians. For Martian technology had already reached its lofty peak by the time human weapons technology had evolved to the stage of throwing stones at each other. But the slow death of the planet halted the march of Martian technology, and now the secrets of the ancient Martians lie forgotten as Martian civilization continues to decay.

Discover the many varied roles of Martian crystals: shoot mighty rays with fire lances, communicate across the void with pair stones, or have mind blowing experiences with Martian mind crystals. Encounter amazing Martian robots or find out how ancient Martian cities were powered by telluric currents. Discover the ancient history of the Canal Builders themselves, and uncover their darkest secrets!

The second part of this sourcebook is dedicated to the Wonders of the Martian Past and contains background information about the technological history of Mars as well as detailed descriptions of more than 20 aspects of ancient Martian technology. Also included are two adventures centered around Martian technology.