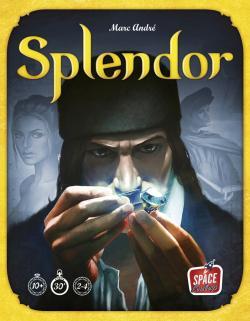 Marvel Splendor is a re-implementation of Splendor with Marvel theming and slightly tweaked rules.

Bring together a team of super heroes and prevent Thanos from ending the world!
The Infinity Stones are scattered throughout the Multiverse. Use their essence to recruit heroes and villains and gain Infinity Points.

Assemble the Avengers, acquire locations and when ready, claim the Infinity Gauntlet!

Pick your tokens carefully, recruit characters to gain Infinity Points and bonuses. These bonuses help you recruit more powerful heroes and acquire locations… until you gather enough characters, power, and Infinity Points to trigger the endgame!

Even though Splendor Marvel uses Splendor’s core rules and high-quality materials, it has a different color structure, a new endgame trigger, and new victory conditions. You can also gain Infinity Points with the Avengers Assemble tile that can be passed from one player to another several times during the game!