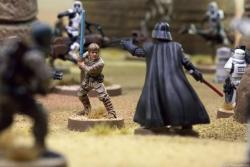 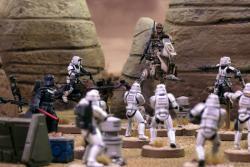 As a miniatures game, Star Wars: Legion invites you to enter the ground battles and skirmishes of the Galactic Civil War as the commander of a unique army filled with troopers, powerful vehicles, and iconic characters like Darth Vader and Luke Skywalker. While innovative mechanics for command and control simulate the fog of war and the chaos of battle, the game`s unpainted, easily assembled figures give you a canvas to create any Star Wars army you can imagine!

With thirty-three unpainted and easily assembled miniatures, and all the cards, movement tools, tokens, and terrain that you need for battle, the Star Wars: Legion Core Set is the perfect way to bring Star Wars battles to your tabletop.