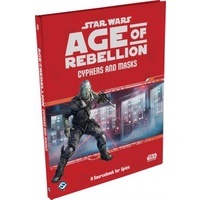 Far from the battlefields of Hoth and the skies of Yavin, the Rebellion is waging a secret war. While it is not completely free of bloodshed, this war is fought primarily with information, deception, and lies. The spies of the Rebellion infiltrate every facet of Imperial life, working alone or in teams to accomplish feats a traditional soldier could never hope to perform. An imposter at court can sow discord among a feudal planet’s noble houses. A disguised assassin can silence a critical Imperial mouthpiece. An overheard conversation can warn of danger and save the lives of thousands of Rebels. A single data drive can reveal the secret to bringing the Emperor’s greatest achievement to ruin.

Fantasy Flight Games is proud to announce Cyphers and Masks, a new sourcebook for Spies for the Star Wars™: Age of Rebellion Roleplaying Game. This 96-page rule supplement comes well stocked with options for players and gamemasters to introduce and enhance the contribution of the clandestine arts in their campaigns.

A War in the Shadows

The fundamental principle of the life of a spy ultimately centers around two elements. The first is that secrets are like currency: acquire them whenever possible, protect the ones you have, but don’t be afraid to spend them towards a greater goal. Collecting these secrets can be as elegant as a social engineering operation in which an Imperial ship captain willingly divulges hyperspace resupply lanes to the infiltrator who is posing as a Naval Optimization Officer (not real) acting directly under Order 3304-H (also not real) issued by Fleet Admiral Yezzif (died in combat last week). It can also be as crude as literally ripping a droid’s head off its body so the data recorder in its head can be plumbed by a recovery technician back at headquarters. There are options.

The second is the spy’s life itself, their tradecraft. Tradecraft is the amalgamation of skill, equipment, and discipline necessary to remain alive and collect their secrets. The employment of tradecraft is reflected in the daily activities of the spy in whatever role they are placed. Even if not actively “on mission,” a spy must constantly be alert for surprise opportunities and even lapses in their own security. In a purely numbers game, for every Rebel spy there are countless Imperial agents hunting them, seeking to infiltrate cells, interrogate operatives, or plant false intelligence. When everyone on the street could either be an asset or a threat, constant vigilance becomes a reflex.

Like all the career sourcebooks for the Age of Rebellion, Cyphers and Masks includes exciting new options for players and gamemasters. Three new specialization talent trees, including the medically-inclined Interrogator, open up more opportunity for unique and interesting characters with original talents and offer new flexible combinations of abilities and strengths.

Cyphers and Masks also includes a new table of Duty concepts to assist players and gamemasters in crafting their PC and NPC identities by focusing on what a spy might concern themselves with in service to the Rebellion. Characters with the Internal Security Duty direct their efforts into ensuring that members of the Rebellion themselves are not accidentally—or purposely—leaking sensitive information to outside eyes. Legend Crafting tasks the character with inventing and then implementing false identities, or “legends,” complete with documentation, records, and incidental evidence that can prove that the new identity is just as real as any other. This work can even be applied to others, such as defectors or informants who put themselves at risk of reprisal by betraying the Empire. Those who put their particularly violent set of skills into service may choose the Wetwork duty if they are able to stomach the immoral tasks that sometimes must be undertaken in service to the greater good.

Closely aligned with a character’s Duty is their Motivation, and Cyphers and Masks includes a Motivation table perfectly suited for a Spy: Secrets. The Secrets Motivation describes how and why the Spy thrives under the unusual conditions of their work. Extraction revels in the acquisition of data from individuals, while Tracking prefers to learn the history and lineage of a Secret which can lead to even greater truths.

While Cyphers and Masks is themed around Rebellion spy efforts, its content and motifs can also fit perfectly into any campaign in which secrets and their keeping are important. The galactic underworld is rife with information merchants, slicers, private detectives, investigators would need to track. Sometimes a skilled operative decides their duty is to the highest bidder, and those stories can be just as exciting to tell.