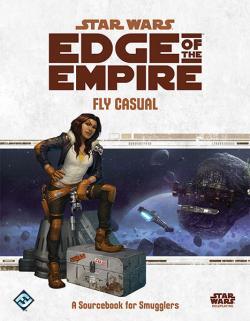 Fly Casual is a smuggler sourcebook for the Star Wars®: Edge of the Empire Roleplaying Game. Smuggling in the Star Wars galaxy is a high stakes job filled with danger and excitement. Fly Casual supports those men and women drawn to this lifestyle of opportunities, freedoms, and thrills by offering them a terrific haul of new character options, equipment, ships, modifications, and potential jobs. Moreover, GMs will find plenty of ways to incorporate smugglers and smuggling runs into their campaigns, even if none of their PCs have followed the Smuggler career path.