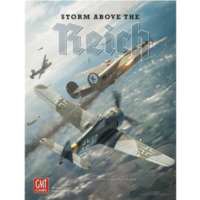 Storm Above The Reich Storm Above the Reich is a solitaire game depicting a Luftwaffe squadron of Fw190s struggling to deter and destroy the relentless daylight raids over Germany during World War Two. The player’s individual aircraft, each represented by a stickered block, must confront the mighty “combat box” formation of the United States Army Air Force, a deadly terrain of B-24 Liberator heavy bombers. Like its counterpart, Skies Above the Reich, the game is a broad strokes depiction that presents the arc of the desperate air war. Stretching from late 1942 to early 1945, Storm Above the Reich follows that trajectory in a series of missions strung together to make a campaign.

Each mission will take a half hour or more to play, while a campaign can last anywhere between 6 to 60 missions. Storm Above the Reich is a stand-alone game; you don’t need Skies Above the Reich to play. However, it can also serve as an expansion for that game. Storm uses the same rules as Skies, and components in one game transfer seamlessly to the other. Combined, Storm and Skies present eight formation maps, six pursuit maps, B-17s and B-24s. In Storm, you get an oversized staffel of 18 Fw190s, with the option of augmenting it into a Sturmbocke staffel. In Skies, you get a staffel of Bf109s, and with the games combined, the staffels can also be combined.

The Mission: You select pilots and “attachments,” such as gun pods, rockets, or added armor. You may also augment your attack with auxiliary aircraft such as Me110s, Bf109s, or later in the war, jet propelled Me163s, an erratic but powerful weapon. Time in a mission is limited, so you must do your best to wreck the bomber formation as quickly as possible, while bringing home as many pilots as you can in order to muster a force for the next mission. The mission is played on a formation map that depicts as many as twenty-one B-24 bombers in a tight array.

The game comes with two double-sided map boards (four maps in all) that as a set chronicle the development and increasing lethality of the bomber formation. Each map is a bigger and more lethal terrain than its predecessor. Will you strike the formation from the nose or from the tail? Will your fighters make a dead-level attack or will they drop bombs on the formation from above? Will you split your squadron to attack from multiple angles, or will they charge at the bombers in successive waves? Will you even have time for this kind of maneuver?

Absolute War Campaign game: From Operation Barbarossa in 1941 to the aftermath of Bagration in 1944. The whole conflict up to the gates of Germany is played out in dramatic fashion.
Playing time: Approximately 3 - 4 hours for a full campaign game, 1- 2 hours for the Shorter Scenarios.

Scale: Each unit is one Army/Front: Each area is about 200 kilometers from side to side. Each turn represents two months of real time."