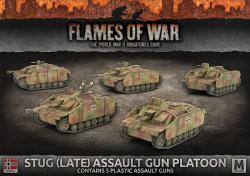 includes five plastic StuG (Late) Assault Guns, one plastic Tank Commander sprue, one Decal sheet and four Unit cards.
The original StuG was designed as an infantry support weapon, but in response to skirmishes with Soviet armour it was upgraded with an anti-tank gun and the StuG (Late) was born.

With their low, turretless silhouette they proved most effective in defensive roles and were especially deadly when carrying out ambushes. Schürzen skirts were added for further protection from enemy hand-held anti-tank weapons, such as the bazooka or anti-tank rifles.

The StuG (Late) is a great addition to any German army. With its low-profile it can be readily stashed in terrain or set up in a deadly ambush. Its armour helps it survive in case it receives incoming fire. These self-propelled guns were perfect tanks from a variety of missions, from supporting infantry units to operating remote-controlled demolition carriers.